A voice from the past

Check out this post on rewriting, condensing, and serving the story. It's on my new blog.

Taking a Chance, Taking a Stroll

Been a while, months and months, since I posted here.

I'm taking a big chance. One of the things we did was combine our two family blogs, this one and the family's Bayou Time, into one blog. It's called BaurLife.com, and it will cover a lot of stuff, Family Life, Writing Life, Pirate Life, and Clinging to Life (my tongue in cheek reference to the fact that after ten years I finally went to the doctor, and now he's got me doing all sorts of stuff to make me healthier. The new platform, once I learn all the bells and whistles, just offers a lot more opportunities to make that happen.

But the biggest thing is that I'm taking a big chance – On myself. This summer I'm self-publishing my novel, "Chrissie Warren: Pirate Hunter." You'll be able to follow all thaton BaurLife.com.

So if you were one of the handful of people who followed The Write Pirate, I hope you'll come around and check out BaurLife. It might be fun.

Posted by John "Ol' Chumbucket" Baur at 9:55 PM No comments:

July's been a busy month. Took the kids to the Rooster Teeth con in Austin. Did a lot of work for the Source. Took another freelance job that had me writing nine stories this month. And spent a week in Louisville helping Tori clean up (both literally and legally) her brother's estate, which was no fun at all.

You'll notice what I did NOT write in that graf – That I worked on my book. Hell, I barely had time to sleep. I scribbled ideas in a notebook, mostly about motivation which, in retrospect, I had neglected in earlier versions. But no actual writing except for the paycheck.

Right now I'm tired, and I'm sore pretty much everywhere. The freelance work was submitted yesterday, I have my "day job," the Source to take care of these two days, but other than that I'm mostly planning to rest. Then Monday – or I may give myself until Tuesday, I'm that tired – I'll finally get back to work.
Posted by John "Ol' Chumbucket" Baur at 2:04 PM 1 comment:

Someone a Lot Smarter Than Me

“People on the outside think there’s something magical about writing, that you go up in the attic at midnight and cast the bones and come down in the morning with a story, but it isn’t like that. You sit in back of the typewriter and you work, and that’s all there is to it.”

Where DOES the Time Go?

Hmmm. More than eight months since I've posted anything here.

It's not like I haven't been working. In fact, quite the contrary. Just didn't feel like I had anything to say here. But that's kind of cheating. If you're a writer, you write.

So where do things stand?

The WIP is still IP, so to speak. In November I got Scurvy Dogs back from Eddie the Agent with some notes about what it needed. I saw what he meant, instantly realized he was right. How could I have thought it was ready? Big hole. Big problem with the story. I could see it clearly. So I went right to work on it, thinking I knew exactly what it needed. Several months later I found myself in the position of the mechanic who took the car engine apart, had the pieces spread all over the floor and couldn't quite recall how they went back together. It was a kind of scary moment. Then I reminded myself – "It's all about the hero journey. Every story is about the hero journey, and you know how that goes. So get busy!" (See Joseph Campbell if you need to know about the hero journey. Or just Google the phrase.)

Finally got a handle on it and it's almost done. All I need is some time.

Which of course is what I don't have a lot of. Still have to work for a living – the freelancing for the Source. And now I've added a second freelance job because who doesn't need a little more money. But that deadline is approaching so I'll be able to get that off my plate, the maybe I can concentrate on writing for me again.

Except Talk Like a Pirate Day is coming, as it does every year on Sept. 19, and that requires a little attention from me as well. But I have to make the book a priority or it'll never get done.

And I want it to get done.

Posted by John "Ol' Chumbucket" Baur at 9:17 AM No comments:

Advice and Laughs from Slushpile Hell

Once a week, the anonymous book agent who's site it is posts part of an epically awful query he has received, along with the snarky comment he'd like to have sent back. There are plenty of sites that tell you how to write a query. (I recommend Query Shark, knowledgeable, sharp and funny.) Slushpile Hell is a weekly laugh and an example of what not to do. Ever.

It's amazing – just amazing – how clueless some would-be authors can be, overvaluing their ability or having such a tenuous grasp on reality. It's also surprising how many hopeful writers out there have been told to write their book by God or gods or other divine messengers. Others who seem to think it's the agent's job to give them assignments to write, which will then be sold for millions. ANd it's hard to read without thinking back about your own query and thinking, "I'm not like that, am I?" It can actually be reassuring. "Well, I may not have a publisher yet, but at least I'm not like thatguy!"

Here's a couple of examples from Slushpile Hell over the years.

Please. Please turn my novels into money. I possess a supreme talent. And I am no fool; I see how this has to be. With the right team behind me I could revolutionize literature and show consumers how there is still such a thing as soul in this soulless nation.
I, too, possess a supreme talent. I am able to read dozens of ill-conceived query letters each week without my head bursting into flames.


The significance of this book is that Angels dictated it to me. I am able to “hear” and write the words that are relayed to me by listening internally. This book is based on channeled Angelic insight and has significant relevance to the people of the world.


Please read my work. It will be the next great explosion.
I’ve read it. Explosion is precisely the word that comes to mind.

Every agent I’ve encountered thus far has been a complete idiot. Let’s see if you can prove you’re different by representing me and my book.
Stop. Your seductive charm is making me feel woozy.

And he occasionally has contests that are fun, and sometimes posts short lists of "advice." And anyone who actually needs the advice he offers needs a lot more than that. I'm thinking heavy medication is in order.

Publishing Tip of the Day!

5 things you may not want to say to an agent at a writers’ conference:

Publishing Tip of the Day!
3 things to leave out of your query package:

WIP UPDATE: 961 words on Wednesday, just missed my quota. But it's going in a good place. I was happy with the day's work. I was even happier with the idea that hit me last night during dinner that I think resolves a potential problem I saw coming down the line and makes the whole thing a lot more interesting. In a way, Tori pointed out, this almost makes Brainiac Kapow a superhero. I definitely thinks it makes him more interesting.

Writing Advice for the Kids

Buy lotto tickets. If you don't win, you still have a little piece of paper. You can use that little slip of paper as a bookmark, and/or to take notes on. Reading and writing is always good advice for any fledgling author.
Pseudonymous Bosch

Pseudonymous Bosch is the pen name of the author of The Secret Series, a five-book young adult series that breaks most of the rules but succeeds wildly because it knows and understands the one secret (a key word in the series) of novel writing – know your audience and entertain them.

The title of the first book in the series is The Name of This Book is Secret. The author spends the first 15 to 20 pages telling the readers NOT to read the book. It's too dangerous. He's not going to tell reveal the name of the city the story happens in, or the name of the school, or even the name of the characters, because the readers might figure out where it happened and that information could prove fatal.

They're five amazing mystery adventures in which three middle school kids do battle with a worldwide conspiracy that will stop at nothing – Nothing! – in their quest for the secret to everlasting life. The stories are wild, completely implausible, unpredictable. Kids love them.

He interrupts the stories repeatedly with asides, footnotes, digressions and, at one point a five-page comic book showing him writing the novels by dictating them to a pet rabbit while his cat offers sarcastic commentary. He also has suggestions for how to disguise your copies of the book so people won't know you're reading them.


The author also has a website, which is not surprising, called The Name of This Website Is Secret, in which he maintains that he is not the person who has been identified as the author, that the real Pseudonymous Bosch is in hiding in a cave or the rain forest, he won't say which, and that the person going around doing book signings, appearing at middle schools and at writing conferences and workshops claiming to be Pseudonymous Bosch is actually an impostor.

He warns his fans in the UK that bookstores there are about to do a special promotion, selling the five volumes of the series at an amazing discount, which could be disastrous because more people would have them, and urges his readers to rush to their bookstores and buy up all the copies before they get into wider distribution.

The bit of advice to young writers at the top of this post came from the site, part of a longer discussion in which he advises readers that the three rules of fiction writing are "Lie, Cheat and Steal." And makes the case.

Pseudonymous Bosch knows kids. Knows the kind of story they like, knows what makes them laugh, what catches their attention, what keeps them turning pages. The whole thing is a joke – and he and his young readers are both in on it, them against the world. 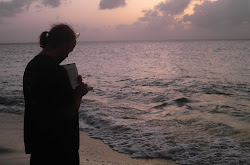 John "Ol' Chumbucket" Baur
Co-founder of Talk Like a Pirate Day, I'm a pirate and a writer, earning a living as a reporter and editor for an online news source while trying to write novels. I'm working on my fifth right now.In that time, I have kept a writing log, jotting down notes after the day's work is finished. I've decided to put it online as a blog, if for no other reason than to save the cost of a new notebook.